When I was in Bir, I learned a common greeting: “Tashi Delek.”  It does not translate to “hello” or “good day-”  it means “good luck.”  I think that wishing “good luck” to someone is a wonderful way of saying hello, but it did make me think about the concept of “luck.”

Someone once told me that I have great luck.  I thought about it, and it seemed true enough.  However, I also have had absolutely terrible luck.  This sort of begs the question- what is luck?  It’s perception.  There are people who have had more incredible things happen to them than I have, but there are also people who have had more terrible things happen to them than I have.  If I were to tally it up, I’d say I come out nearly exactly in the middle- and yet I consider myself one of the luckiest people on the planet.

A major factor of how “lucky” you are is your perception.  If you are optimistic, you will automatically be more lucky simply because you focus on the positive.  If you are pessimistic, you will remember the negative and naturally feel much less lucky.  Luck is sort of a logical impossibility really, because there is no real reason why one person should attract any more positive events than another.  A far better alternative to “luck” is the idea of karma.  If you don’t believe in the power of positive thinking or buy the idea that good actions done bring good results, that’s fine- the science there is pretty shady too.  But if you ask me, anything that gets people to do good or think positively is a good thing.

It’s too easy to blame things on “bad luck.”  It’s a way of escaping responsibility.  Sure, sometimes things really just don’t go your way- that’s life.  But you can always control your perception of it.  Though it’s extremely unlikely that thinking positively will cause you to randomly find a fifty-dollar bill on the street, at the very least it will cause you to feel better about little things that happen to you.  Thinking good thoughts can cause small occurrences like running into an old friend seem exponentially better, and can also make bad things seem much less tragic.

Whether you believe in luck, karma, the flying spaghetti monster, whatever- you can make luck just by altering your perception of the smallest things.   People I regularly converse with always think I have the most amazing life- and that’s true, but only because I perceive it that way.  You can too!

What is your quest?

Error: Twitter did not respond. Please wait a few minutes and refresh this page. 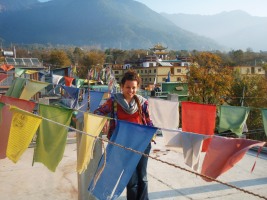